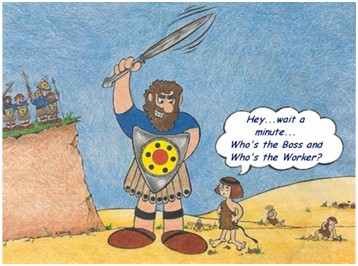 A major issue in both federal and state elections is "minimum wages" with the speaker being either for or against laws almost never clearly identified. Federal and state regulation of wages, through setting a minimum hourly amount employers are to pay their employees is complicated, and neither the employer nor the employee would be well served by a simplistic law declaring minimum wages to be ineffective, or by nullifying federal law and relegating all laws on that subject to the unpredictable politics of each state. (See also the blog posted here in October 2012 entitled "Scrooge, Bob Cratchit and the minimum wage" and the comments and resulting discussion with attorney Terrance Jones and Kay Hedrick).

My client was an employee convinced that the termination of his job related to the employer's presumed violation of minimum wage requirements, and he hoped that circumstances would help him either have his job restored to him, or receive compensation for his job loss.

Employers resent laws that undermine their control of business decisions, and feel that employee participation in employee groups (unions) are attempts to interfere with the employer's direction of their own business.

Missouri is a "right to work" state and employees can be fired for any reason or no reason. Just being "troublesome" might be enough. (See http://www.peggyhedrick.com/employment.html for discussion of "employees at will" and a "right to work" state). And what is more troublesome than an employee who is trying to live on an obviously inadequate salary, and, lives with his family in a car, and/or lets his employer know that his children are hungry, someone in the family is sick, and they don't have the means to pay for medicine, let alone pay for a doctor.

"I'm trying to run a business, here," employers may say. "You knew what this job paid when I hired you--it's up to you to figure out how to live on what you earn, and solve your problems yourself!"

Neither the employer nor the employee had a realistic understanding of the minimum wage law, beyond the bottom line figure ($7.25 per hour) that applied in their state at that time. The first federal minimum wage was set at .25 cents, seventy six years ago, during the administration of President Franklin Roosevelt in 1938, and applied only to specific employees whose jobs involved interstate commerce. The amounts, and terms, inched their way up in response to wars, economic problems and the development of unions and others speaking for employees until the present $7.25 which covers "all workers who are not exempt." There are huge numbers of situations making certain employers/businesses and/or certain employees, exempt. (See http://www.dol.gov/whd/regs/compliance/ca_main.htm).

States are not uniform in their application of the legal concepts.

Lawyers and Judges addressing legal concepts rather than practical circumstances are more concerned about federal invasion into territory that may have, in 1938, been intended to be reserved to the states. At that time the restrictions on wages were carefully reserved to employees engaged in interstate commerce through exemptions (see attorney Terrance Jones's comments in "Scrooge, Bob Cratchit and the minimum wage...).

My conclusion: whether or not the legislature erred 76 years ago is water long ago passed under the bridge. We need the uniformity and predictability ensured by both federal and state action.

An excellent article, Peggy. Lawyers, judges and politicians can argue “states rights” until they are blue in the face. As a mere citizen, I am free to state that the majority of we Americans believe that our federal government is responsible for protecting us, and that includes establishing a reasonable minimum wage. In a related issue, it is time to remove the taboo against using the phase “redistribution of wealth” from our lexicon. The top 3% have done well enough for themselves, thank you very much, and it is time to give some back to the folks who do the work. In another related issue, the main reason we have a budget deficit in this country is because the middle class doesn’t make enough money to pay the taxes we need to support the country. The solution is to raise the minimum wage. This rising tide will lift all boats and will not sink small business as conservative propaganda would have us believe.
Wally Rees
Posted by Wally Rees on 12/15/2013 at 4:34pm

Thanks for your comments, Butch/Wally! I'm sure we agree on states' rights and balancing the budget, and the importance of the middle class, and it was good to hear your views so well stated. As to removing the taboo against the phrase "redistribution of wealth" from our lexicon, I'd like to see "propaganda" become a useless tool for reaching decision makers. So many of our leaders now find it indispensable to counter their opposition in using it to manipulate juries and judges, donors and voters. Lawyers, judges, and politicians, all feel pressured to counter the use of propaganda by their opponents in arguing their case(s) before those who vote aye or nay on their issues.
Posted by Peggy S. Hedrick on December 23, 2013 at 9:06am